The Not So Good Report

Sorry if this kind of messes up your Wednesday but the news for New York Ranger prospects was not that good on some fronts. For New York Islander fans, they can cross their fingers as both of their prospects survived the first Team Canada cuts.

But to start we want to nip something in the bud before it gets out of hand since it is only fair to defend the New York Rangers for something that they did not do or have not done. What we are talking about is a reporter in Windsor wrote that Michigan senior Carl Hagelin (2007 6th) would sign with the Detroit Red Wings when the Rangers don't sign him.

First off anyone who knows this place knows we will rip on the Rangers when they screw up (in our book) but in the case of Hagelin some reality is called for.

Hagelin (who had been named captain of Michigan's hockey team) turned them down, whether it was because he wanted his degree or he wanted to win the Hobey Baker this year we can not confirm. But what we do know is that the Rangers tried to sign him and that they will try again as soon as Michigan's season ends.

Despite being a 6th round pick, the Rangers consider Hagelin as a top prospect who can given them a 2 way forward with speed, defense and a high hockey IQ. What people saw last Saturday was what Hagelin has been doing the last 4 years and the Ranger know it.

The Rangers do want Carl Hagelin end of story, if he does not sign it will be because of Hagelin not because of the Rangers.

We are pretty sure that Scott Stajcer (NYR 2009 5th) is not smiling at the moment as after already missing 10 games with an undisclosed "nagging" lower body injury, Stajcer now needs surgery. It is interesting that Stajcer has gone from 'being held out as a precaution" to missing 10 games to now needing surgery.

Owen Sound has not been very forthcoming with information so unless the Rangers tell us then we will only be left to wonder how serious. If we see Owen Sound made a trade for an experienced goalie then we will know that Stajcer will be out for an extended period perhaps the rest of the season.

Ethan Werek (NYR 2009 2nd) is listed as "day to day" with what is being called an upper body injury. His Kingston Frontenacs do not view his injury as serious but no offense to the Frontenacs but we have heard that line before.

You know this has been a harsh season for Ranger prospects when you are happy to hear that it is an upper body injury for Werek. Last season it was an injury to his knee that hurt his development and cost him to miss a couple of games at the start of this season.

As it is we are feeling sorry for Gordie Clark and his staff as they have watched Ranger prospects lose close to 100 man games due to injury. For a scouting staff it would have been easier if the prospects had been healthy and just playing badly as that you can adjust your scouting for.

With this many injuries, the Rangers have to look at it as if at least 2 prospects will not be signable in June and 2 others have lost a full season. 4 picks that one can not blame the Rangers if they do not pan out as nobody thought this many players would be out this long.

Here is something to chew on as the World Under-20 championships could actually boil down to a Ranger/Islander match up with Canada having Islander prospects Calvin De Haan (2009 1st) and Casey Cizikas (2009 4th) going against Team USA and Ranger prospects Chris Kreider (2009 1st) and Ryan Bourque (2009 3rd) (ok USA also has 2010 NYI 1st rounder Brock Nelson looking for a spot).

Da Haan and the 2 Ranger prospects are sure shots to make their respective rosters with Cizikas and Nelson doing a lot of praying. We hate to say this but we do worry that Cizikas will get cut early Wednesday morning as some kind of example of how Team Canada's coach Dave Cameron is not playing favorites.

Cameron happens to be Cizikas's coach with the Mississauga St. Michael's Majors and in the first set of cuts from Team Canada have been some really strange decisions such as cutting Ryan Howse and Joey Hishon. Oh well Team USA is looking to win back to back goals and cutting 2 of the best offensive weapons Canada has to offer will make life easier for Team USA.

We are biased but if Cizikas is cut then we will call it a dumb move as Cizikas is a solid a 2 way player as there is. 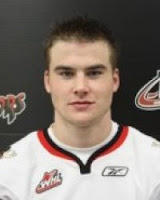 Only 2 Ranger prospects saw the ice on Tuesday with Dylan McIlrath (2010 1st) scoring his 3rd goal of the season to help lead his Moose Jaw Warriors to a huge win over the division leading Saskatoon Blades 4-1. McIlrath opened the scoring for the Warriors when he cashed in a power play goal at 11:21 of the first period for a 1-0 Warrior lead.

Hard to believe this Warrior team was the same one that started the season with just 3 wins in their first 10 games. Since then the Warriors have won 16 out of their last 23 games (7-2-0-1 in last 10 games). This is the Moose Jaw team that we expected to see this season.

In Calgary Roman Horak (2009 5th) had an assist for his 38th point of the season as his Chilliwack Bruins lost to Calgary 3-2. For Horak it will be his last game with the Bruins until after the World Under-20 championships in January but if you would had told us that Horak would be 15-23-38 after 30 games this season we would have laughed at you.

Last season in 66 games Horak was 21-26-47 so it is safe to say that unless he gets hurt that Horak is on a pace to wind up 33-51-84 for the season. Glen if you are not busy please make sure that while at the WJC that you get Horak signed, sealed and delivered for next season.

How Swede it is... in Detroit (can you blame Hagelin for wanting to play in Detroit? He has spent the last few years in the area already).

Too bad story is a pipe dream made up by someone who does not know full story.
NYR want him,he wants to finish school.
Deal will be signed when Hagelin I s done at Michiga

Help Them Find Their Way Home