Friday night was more than just the New York Rangers game two win as the last two Rangers prospects got their league finals underway with upset wins on the road. When the OHL and WHL league finals got underway both Windsor and Seattle were underdogs and not expected to offer serious challenges.

Someone forgot to tell that to Windsor and Seattle as they came out and played like Rangers clones. Both teams were coming off a tough game seven conference finals while their opposition had sailed through their playoff runs.

Captain Will Cuylle and his Windsor Spitfires were facing the Hamilton Bulldogs, the OHL's Eastern Conference Champions who went 12-0 in their playoff run to reach the finals. Hamilton had the best overall record in the OHL and was the CHL's top-ranked team.

Game one started off with a scoreless first period and Hamilton scored first with a power-play goal. Cuylle got the equalizer 49 seconds later when linemate Wyatt Johnson hit Cuylle coming down the slot and Cuylle fired a snap shot to tie the game.

Hamilton would regain the lead late in the second and then add another goal midway in the third to take a 3-1 lead. But it was Cuylle who started the comeback with his team on the power-play, Cuylle scored his second goal of the game.

The Windsor captain found a loose puck and took it to the net firing a shot over the stick side of the Hamilton goalie to cut the Hamilton lead to 3-2. Windsor would tie the game and force overtime where they would score the game-winner at 9:30 of the first overtime.

The win gives Windsor a 1-0 series lead and stole home-ice advantage away from Hamilton. Cuylle was named the game's second star for his two goals on six shots with a +1 and a 7-5 mark on his faceoffs.

For Cuylle the two goals improved his playoff numbers to 12-11-23. Game two will be Sunday starting at 2 PM EDT.

In Edmonton, Matthew Rempe and his Seattle Thunderbirds were facing an Edmonton Oil Kings team that only had one loss in their playoff run through the WHL's Eastern Conference playoffs. The Oil Kings were coming off knocking off the Winnipeg Ice who were the favorites in the WHL.

Seattle is so many ways is having a playoff run just like the Rangers, down 3-1 and coming back to defeat the Portland Winterhawks. Winning a second road game seven against the Kamloops Blazers.

And Edmonton is considered the heavy favorite to win this series but Seattle has other plans. A scoreless first period saw Edmonton dominate Seattle. Edmonton outshot Seattle 21-7 and only Seattle's goalie Thomas Milic kept the game tied at 0-0.

In the second period, Matthew Rempe got his Thunderbirds on the scoreboard with an even-strength goal at 1:59. Rempe picked up a rebound of linemate Reid Schaefer and backhanded a shot into an open net.

🎥HIGHLIGHT OF THE NIGHT🎥

It was Rempe's sixth goal of the playoffs and Seattle never looked back. They would score a second goal and then hold off the Oil Kings in the third period. That is where Rempe stood out to me.

More than his goal, it was Rempe's defensive play in the third period that was the difference-maker.  In the final minutes of the game, Seattle sent Rempe out to take the defensive zone faceoffs and he held his own.

For the game, Rempe was 11-6 on his faceoffs which might not seem like a lot but most of them were in those final minutes.  And there was a moment that stood out for me the most, Seattle's goalie Thomas Milic had just made a save in the final minute.

As an Edmonton player was skating towards Milic, Rempe stepped in front of his goalie and made sure nobody was going to touch Milic. Seattle wins 2-1 to take a 1-0 series lead with game two on Sunday.

Here is Rempe in the post-game news conference

Posted by Jess Rubenstein at 2:21 AM No comments:

And There Was Just Two Left


Wednesday was more than just the New York Rangers game one win over Tampa in the NHL's Eastern Conference Finals. Will Cuylle and his Windsor Spitfires shut out Brennan Othmann's Flint Firebirds 4-0 in game seven to win the OHL's Western Conference Championship and the Wayne Gretzky Trophy that goes with it.

The Spitfires advance to the OHL finals where they will face the Hamilton Bulldogs for the OHL championship and the right to go to the 2022 Memorial Cup. Hamilton had the best record in the OHL and will be heavy favorites to knock out Windsor but the Spitfires are a battle-tested franchise that has been here before.

In game seven, Will Cuylle was scoreless on six shots but he was excellent on the defensive side helping to keep Brennan Othmann off the scoresheet in the biggest of games. Cuylle a case can be made scored the biggest of points when he set up the game-winning goal in overtime of game six.

His play in game six in my view set the stage for Windsor to come back from facing elimination in game six on Tuesday night to win in game seven.on Wednesday. The Firebirds never had a chance in game seven as while they tried, two first-period goals by Windsor took away any hope they had left in them.

Brennan Othmann finished his playoff run 9-15-24 which is nothing at all to feel bad about; he tried his best. He led his team with six shots and in the third period was double and triple shifting trying to get his team back into the game to no avail.

In a crazy way losing was a good thing for Othmann as he has responded really well to slights and heartbreaking losses like this. It will light a fire under him to work his butt off during the off-season in his second bid to force his way onto the Rangers roster next fall.

From going 50-47-97 during the regular season there is nothing left for Othmann to do in the OHL, so sending him back to Flint next season will do almost nothing to help advance his development. He is just 19 (his birthday of 1/5 is what hurt him) so he can't play in Hartford next season since he only has two OHL seasons under his belt.

See him on Broadway next season.

Back to Cuylle as he is 10-11-21 and the Windsor captain knows what it is like to play in the big game having played for Team Canada in international competition. The more I watch him play the more I see a bigger Chris Kreider as he makes the same power moves, he leads not just with his vocal skills but his play, and when you need him the most, he shows up to play.

Windsor starts its final push for the OHL title on Friday in Hamilton. 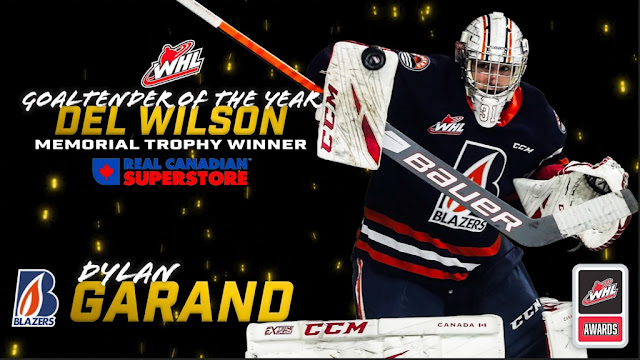 The WHL announced their annual awards and goalie Dylan Garand of the Kamloops Blazers was named the Del Wilson Memorial Trophy as WHL Goaltender of the Year. Garand the Rangers' fourth-round pick in the 2020 NHL Entry Draft was at top of the WHL leader board in both the regular season as well as the playoffs.

With this selection, Garand becomes eligible to win the CHL goaltender of the year award going up against the OHL and QMJHL goalies of the year.

If you would have asked me which Ranger prospects would be playing for their league championship, Matthew Rempe's name would not have made the top five. His Seattle Thunderbirds were too young, lacked depth, and most importantly had too many more talented teams ahead of them in their own division and conference.

Surprise, Rempe, and his Seattle Thunderbirds continued their "Rangersish" run in the WHL playoffs after knocking off Dylan Garand and his Kamloops Blazers in their game 7 at home on Tuesday. They are a carbon copy of how they have twice come from behind in two playoff series to win game sevens on the road.

Rempe has been the ideal defensive center, stopping the other team's offense in key moments and providing a screen on the power-play units. Pretty sure that Dylan Garand is going to be very happy to not have Rempe screening him on offense.

Rempe and the T-birds are going to face the Edmonton Oil Kings in the WHL finals. Just like how the Rangers are the underdogs in their series against Tampa, the T-birds will be against the Oil Kings.

Don't bet against these Birds.

Wednesday was the annual deadline for NHL teams to sign draft picks from both North America (2020) and Europe (2018). In the case of the Rangers, it means Evan Vierling of the Barrie Colts (5th round 2020) and Jakob Ragnarsson (3rd round 2018).

Not every draft pick develops to where the Rangers decide to offer them an entry-level contract. Vierling was hurt by Covid and injuries which disrupted his playing career while Ragnarsson simply never got out of playing in the second division of Sweden's hockey leagues.

Posted by Jess Rubenstein at 1:20 AM No comments: