Two Stars for the Price of One

The 2008-09 season was one of the very best in New York Ranger prospect history but if the first couple of weeks are any indication; then folks we are going to have a whole lot of fun here. How can one not like an evening when only 2 prospects are playing and both wind up earning stars for their efforts?

It took an extra 4 games but Chris Doyle finally made his 2009-10 season debut worth the wait as Doyle's 3 points helped his Prince Edward Island Rocket to a easy 6-1 win over the Saint John Sea Dogs in QMJHL action on Wednesday evening.

Doyle who had to sit out the 1st four games of the QMJHL season after being suspended by the QMJHL for a collision with a linesman was ruled a deliberate act made up for lost time with a goal and 2 assists as the red hot Rockets finished a 3 game road trip on a happy note.

Doyle who was also named as one of the Rocket's assistant captains got his night going when he found Benjamin Casavant for the first of Casavant's two goals at 8:24 of the first period. The goal was on the power play and gave the Rocket's a 3-0 lead.

Doyle's second point of the game also came on the power play but was a secondary assist on Casavant's second goal of the game, this time at 17:50 of the first period which gave the Rockets a 4-1 lead. In the second period Doyle got his first goal of the year when he cashed in a feed from Casavant to give both players a 3 point night at 16:29.

The goal came on the power play giving Doyle a nice way to get his season going and a 5-1 Rocket lead. For Doyle, it was a great start after having to skip Traverse City while still recovering from a back injury suffered last season.

By all accounts, Doyle is very determined to step up this season to show his critics that he is willing to elevate his game in order to make it to the next level. The first step to us was that he has shown a willingness to become a leader after being a follower for most of his QMJHL career. 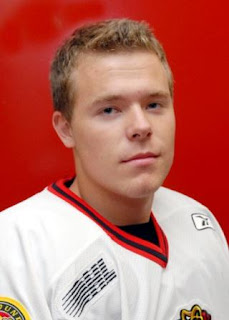 It took 2 games but Scott Stajcer got some support and made it stand up as the Ranger's 2nd of two 2009 5th round picks earned his first victory of the season backstopping the Owen Sound Attack to a 5-2 win over the Sarnia Sting. It was also Owen Sound's first win after 2 losses last week to open the season.

In the win Stajcer stopped 32 out of 34 shots but more importantly got a "smarter" effort from his teammates in support of him. In his 2 appearances already Stajcer has faced 65 shots, giving up 5 goals of which 3 were power play goals due to bad penalties taken by teammates.

With the young Attack team getting goals from 6 different players, Stajcer also got defensive support as the Attack held the Sting to just 18 shots over the 2nd and 3rd period to send the Attack fans home happy.

After 2 starts Stajcer is 1-1 with a 2.5 GAA and a 0.923 Save Percentage. It is going to be interesting to see if Owen Sound coach Mark Reeds plays Stajcer on the road on Friday evening against the Kitchen Rangers or saves him for Saturday night at home against the defending Memorial Cup Champion Windsor Spitfires.

The Spitfires are favorites to repeat as Memorial Cup champs so it will be a very good test for Stajcer.

It would be a huge joke if Tortorella uses Artem Anisimov as a 4th line center as that would be a waste of Anisimov's talents. Equally a waste would be sending Anisimov back to Hartford as the talented center has very much proven after a slow start that he is an NHL talent.

Anisimov is best used as the 3rd line center even if it means using Prospal as a winger; let us be real here as Prospal is not a long term Ranger but Anisimov is. If you keep Anisimov then you must develop his talent at the position he is going to be best going to help the team at.

At the same time if that is the case then you then should send Evgeny Grachev to Hartford for now. He will be back sooner rather than later and when he does it will be for good. In the meantime the smart thing is to let him eat up as many minutes as he can at Hartford and play in every situation possible.

We will be surprised given all the possibilities of injury or some playing his way out of the lineup that Grachev is not back by New Years. In the meantime playing part time does not help the Ranger's future power forward refine his game but 20 minutes a night at Hartford will unleash the monster known as Godzilla that we know all too well.

On the blueline, the smart move is to find a way to carry 7 defensemen but the Rangers under Sather do not always do the smart thing. Cap issues might prevent the team from carrying 7 defensemen as it did last season.

Still the first idea we want to dismiss is to carry Del Zotto for 10 games to see if he can handle NHL play. No either Del Zotto stays all season or he does not as 1 game, 10 games or 100 is not going to make a difference now if he has to settle for part time duty.

In London, he is going to be the best defenseman in the OHL if not the CHL. Del Zotto will be a team leader with London and Team Canada will add Del Zotto so he can win a gold medal at the World Juniors.

With London, Del Zotto will get to play a ton of high pressure games with a team on his back and we know he will deliver. Yes this is a broken record, but we see a repeat of Marc Staal in 2006-07 when Staal almost by himself carried the Sudbury Wolves to an OHL championship.

Instead we will find out what Bobby Sanguinetti is made of and we think that he will be a very pleasant surprise for the Rangers. Sanguinetti has worked very hard for this opportunity and being used as a 3rd pair will wean his way up the depth chart.

We have watched Bobby Sanguinetti basically be overlooked by just about everyone, maybe his problem is that he does not try to draw attention to himself. Yet since the day he was drafted, Sanguinetti has ignored all the critics and worked his butt off to get this close to his dream of becoming not just an NHL player but to be a Ranger.

The kid from Jersey has dreamed of the day when he could hear his named announced at Madison Square Garden and we think his wish will make a lot of us very happy.

This entry is the 600th edition of Prospect Park and it would take 600 posts to say thank you for all of you who make this possible but really there is one person who deserves more thanks anyone else.

That is the poor person who puts up with me and this crazy dream of getting all of you folks the news on the Ranger prospects. That would be my wife Colleen who knows how much this means to me.

Colleen nods with an understanding look when my cell phone buzzs about how a prospect is doing while we are out doing anything. She gives up a ton like me going on the road in order to cover the kids.

Colleen has put up with this New York obsession about the Rangers since 1983 and one could say that we are a source of amusement to the native Oregonian. Still I really doubt that even the most diehard Ranger fan would understand a laptop getting trashed by a teddy bear or letting me run off on a Thanksgiving weekend so I could cover a bunch of games in 4 days.

Thanks Col, number 600 belongs to you

Posted by Jess Rubenstein at 7:15 PM

I am a long time reader, I never posted before. I am very appreciative of your effors to bring us ranger prospect news. This blog is one of the few hckey blogs I visit religiously.
Thanks Jess, You are one of the best and congratulations.

Colleen, A big thanks from a Rangers fan deep in the heart of Texas.

i've been crowing the same stuff about anisimov on other boards, i'm right there with ya. prospal is playing for his next team's contract, not the rangers. he may be a good deal at 1.1m, but there's no reason to play him at center. let anisimov challenge himself at centering the third line... don't screw up his development like korpikoski had his done when renney couldn't provide him with stable minutes.

What are they waiting for to sign Luke Pither? Do you think another team will come in before and sign him to a contract?

What are they waiting for to sign Luke Pither? Do you think another team will come in before and sign him to a contract?