A Little Of Everything

We start with an interview that 2011 5th round pick Shane McColgan did with Doyle Potenteau who writes the always interesting "Dub Nation."

We like the way McColgan handled himself in answering honestly as to why he was an early cut from Team USA:

“They told me at the beginning of camp that they wanted me to produce offensively and that’s what I do best, and I think why I got cut is because I wasn’t doing that,”

Even better is this quote from Bruce Hamilton the President and General Manager of McColgan's Kelowna Rockets regarding why he felt McColgan fell in the 2011 NHL Draft:

"“He did nothing wrong,” Hamilton said. “I think he gets a bad rap because people think he’s selfish and this and that, but he’s a team guy. I don’t think that (draft position) is a big deal. He’s a good player that’s going to be given an opportunity down the road here to show what he can do. Kudos to the Rangers, they took the chance and went with him, and they’ll be rewarded with a special player.”

Speaking of McColgan, Regan Bartel who does the play by play for the Kelowna Rockets as well as authors "Regans Rants" chimed in on with one involving McColgan:

3) Losing three of your top four point producers from last season means someone has to pick up the slack. Geordie Wudrick, Tyson Barrie and Mitchell Callahan are gone. Look for Brett Bulmer, Zach Franko and Colton Sissons to pull harder on the rope this season. Leading the pack will be Shane McColgan.

In our eyes the key is can McColgan be a consistent scorer? We have seen what he can do when his game is on (like a 3-1-4 game against Portland in the WHL playoffs) and here look for yourselves at the playoff run that McColgan had.

19 points in 10 playoffs games and scoring at least 1 point in each game says that McColgan can score but now the trick is do it every night. If he does then those words from Bruce Hamilton will ring very true.

Then the Rangers announced that they had signed Andre Deveaux to a contract. Thanfully this time those who write about the Rangers were able to not freak out as many did when the Rangers signed Brendan Bell.

Deveaux means that the smaller Ranger prospects on the CT Whale roster will know they have a "big brother" looking to protect them from those who look to take cheap shots. And should the Rangers call him up then nobody will mistake Deveaux for a possible "Lady Byng Trophy" candidate.

Finally some New York Islander news to report on for the Islander fans that is not depressing. First off we need to explain why we asked whether or not to provide prospect coverage of the Islanders.

For reasons unknown we had stopped receiving their press releases and having those releases as well as Islander recognition is key in getting the prospect information from their junior or NCAA teams. Especially the NCAAs where you can not simply go "Hi I am covering Islander prospects can you make so and so available for interviews as well can can we get your daily reports too?"

Covering individuals is a whole lot tougher to do to begin with; no team support makes it almost impossible. By team support what we mean is just doing something as simple as saying they know who we are and what we are doing.

That said kudos to the Ranger fans who said they too wanted to see us continue covering Islander prospects. As fans of the Godfather movies the saying we like to use is "Keep your friends close but your enemies closer"

No other rivalry has been as bitter as the Ranger/Islander rivalry and for those too young to know about the days of Potvin or Cloutier; all we can say is trust us you have no idea what bad blood is until the 2 teams play each other in the playoffs.

The rookies will play 2 games against Boston Bruin rookies on September 12th and 13th with game 2 open to the public at the NVMC. Really wish the Islanders would get themselves involved in something like Traverse City as we can say that it has paid huge dividends for the Rangers.

Like the Rangers the Islanders have 3 non-roster players invited to their rookie camp.

Art Bidlevski-- it is ironic that we mention Bidevski the day after Rick Rypien passed away as it would be a very fair comparison. Bidevski is a smallish guy who will fight anyone and not back down from them.

The similarities to Rypien are scary similar as both undersized middleweights played for the Regina Pats in the WHL and both have had to work double time to earn their roster spots.

Benn Olson-- is not going to win style points as he really is a ECHL enforcer who most likely will wind up filling the same role for the Islander ECHL team the Kalamazoo K-Wings.

Olson is 6'4 defender who has bounced around recording just 1 total goal but 574 PIMs since turning pro in 2008. We remember him from his Seattle Thunderbird days but found this fight (courtesy kbarbdamnit)

Brett Gallant-- makes it a hat trick for the Islanders as another guy who really offers nothing but being a goon. Gallant racked up 205 PIMs playing for 3 different teams last season.

Going to take a wild guess here and suggest that the Islanders were not looking for help in the shootout department with this trio. 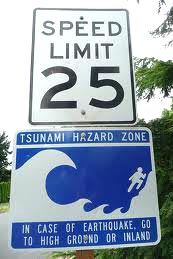 So we actually took a day off and headed to the Oregon Coast and driving up Highway 101 is always a source of awe to the beauty of nature but at the same time the "oops not a good idea" people work for the Oregon Tourism Department.

I want to meet the person who had this bright idea as I am not sure who the sign is meant to slow down; the people running from said Tsunami or the Tsunami itself?

Somewhere on the Oregon Coast I can honestly picture seeing a small town police officer sitting with his radar gun waiting to pull over a Tsunami.


(McColgan courtesy of the Kelowna Rockets)
Posted by Jess Rubenstein at 11:34 PM